We present a network analysis of competitive positioning of collaborators and competitors in a dynamic ecosystem. Weighted networks are derived from a broad range of data sources (press releases, announcements) for the Edge Computing market where nodes represent companies and edges represent business relationships. The topology of the resulting association networks, via weighted centrality measures, provides a descriptive assessment of the complexity of the system. A new measure based on a company’s core competencies and its inter- actions locates its position along a continuum describing analytics, communication and computational expertise. Following mergers and acquisitions, these measures dynamically change. Illustrative mergers are evaluated by the changes of eigenvector centralities, similar to changes of page ranks. Agent based simulations are calibrated based on the historical data for mergers and acquisitions and for initiation or termination of partnerships. Subsequently they allow decision makers to proactively manage their company’s position in the dynamic ecosystem. 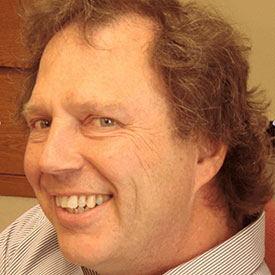 Dieter Armbruster is interested in mathematical modeling: Collective behavior of swarms, modeling disaster recovery, modeling and optimization of production flow in semiconductor factories, derivation and analysis of the evolution of ant colonies and other social insects and modeling of molecular signaling pathways have been recent topics. A common feature among all these models is the occurrence of emergent phenomena: the system consisting of many individual parts behaves in novel ways that are not present at the individual level. Understanding the dynamics of emergent phenomena is important to understand the evolution of biological and social behavior, controlling them allows us to optimize factory production, traffic flows and emergency evacuations. The mathematical tools used include dynamical systems; methods of complexity science including dynamics on networks, game theory, decision theory and agent based simulations; and kinetic theory and partial differential equations.