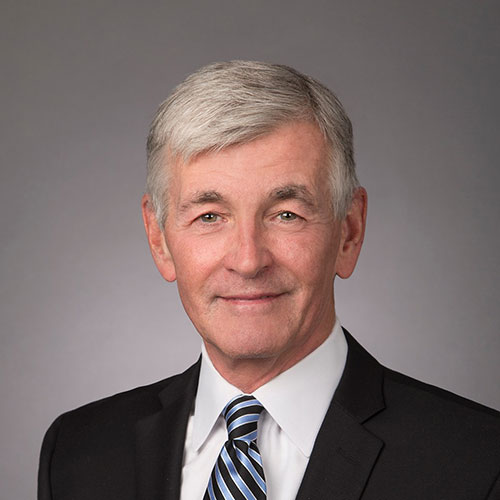 John M. McHugh was sworn into office as the 21st Secretary of the United States Army on September 21, 2009, following his nomination by President Barack Obama and confirmation by the United States Senate. Secretary McHugh served until November 1, 2015, making him the second longest-serving Army secretary in U.S. history.

As Secretary, McHugh functioned as Chief Executive Officer of the world’s most powerful landforce, responsible for more than one million soldiers, more than 400,000 civilian and contractor employees, and a nearly $250 billion budget. Secretary McHugh fundamentally reshaped how the Army does business, through comprehensive acquisition reform, innovative energy solutions, reducing the size of Army headquarters, and civilian workforce transformation.

Secretary McHugh provided leadership and oversight on all matters relating to the United States Army, including weapons systems and equipment acquisition, installations, environmental issues, manpower, personnel, reserve affairs, communications, and financial management. During his tenure, Secretary McHugh earned a reputation as a hands-on problem solver. When he came to office, the Army was engaged in two wars; he oversaw the largest retrograde operation since World War II, all while reducing the size of the Army in response to significant budget cuts.

He also successfully guided the Army through a series of public crisis, including restoration of the honor and dignity of Arlington National Cemetery following revelations of gross mismanagement of the nation’s premier military cemetery. Throughout the Army’s challenges, Secretary McHugh worked to maintain and improve the quality of life of its soldiers and civilians. He also served as Public Sector Chairperson of the National Action Alliance for Suicide Prevention.

Prior to becoming Secretary of the Army, he was a member of the U.S. House of Representatives, representing Northern and Central New York. During his nine terms in the U.S. House of Representatives – all of which he served on the House Armed Services Committee – he earned a reputation as a strong advocate for soldiers and families. He also served as a member of Committee on Oversight and Government Reform, and for six years as Chairman of the Subcommittee on the Postal Service where he spearheaded legislation that significantly reformed the United States Postal Service. He was also a member of House International Relations Committee, the Permanent Select Committee on Intelligence, and the United States Military Academy Board of Visitors.

Secretary McHugh was born in Watertown, New York, where he began his public service career in 1971 as the Confidential Assistant to the City Manager. In 1976, he joined the staff of New York State Senator H. Douglas Barclay, with whom he served as Chief of Research and Liaison with local governments for nine years. Succeeding Senator Barclay in 1984, he served four terms in the New York legislature’s upper house before his election to the U.S. House of Representatives in 1992.